An excerpt from INSPIRALED, Chapter 15:  Cops and Amnesia

My brothers seemed to get bored with my line of questioning so they changed the subject by talking about football.
“Dude, did you know my mom works with a Redskins player?  She took a picture with him and she’s wearing his two Super Bowl rings!  One’s from when he played with the Packers and the other from when he was with the Steelers,” said Kavi, as he showed Coco the picture on his phone.
It was true.  Mom had recently begun working with a client that was a two time Super Bowl champ.  And he was a super nice guy.
*****
Yep, all true but doesn't sound very believable...until I bust out my proof!  (My eyes- I know, just call me Earl!)  To read more fun stories based on real life check out my debut novel, INSPIRALED!


Have a laugh at my book trailer:  https://www.youtube.com/watch?v=9rUHA6BjxIA 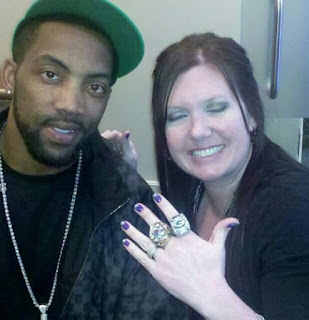 Go Ahead, Make His Day

He ran with the gun pointed at the sky.  I could just barely make out three shadowy figures running down the street away from him.  Gramps stopped running by Zander and Zoe’s house and strutted his way back, huffing and puffing.  I ran out of my bedroom and found most of the rest of the family standing in the foyer looking bewildered as they stared out the open front door.  We all watched in silence as Gramps walked back into the house laughing.  We stood there in shock as he holstered his weapon.  Yes, he was wearing a holster.
“Dad, what happened?” Mom demanded, as she pulled a sweatshirt on over her pajamas.
“Oh, you should’ve seen it.  Those kids scattered like roaches when the light comes on!” laughed Gramps.  He adjusted his holster under his bulging belly like he thought he looked cool.  He kind of did.
Posted by Unknown at 5:30 AM No comments:

What inspired you to write your first book?

Often I get asked where my inspiration came from for my first novel, Inspiraled.  I remember it vividly.
A few years ago, my middle daughter was in a serious car accident.  It was a crash that could have been avoided and one that nobody should have survived according to the officer on the scene.  After several days in the hospital and a recollection of some of her memory, my daughter with her broken bones and raw tender skin, looked at me seriously with eyes full of pain and confessed, "Mom, I had a feeling that I shouldn't get into the car with those boys.  Something told me not to go with them but I didn't listen.  I should have listened."
I knew at that moment that I had to tell her story.  Its one that we can learn from no matter where we're living or what stage of life we're in.  We all have decisions to make daily, some monumental, others miniscule, but all of them having an impact on something or someone.
In the book, I had fun including some exaggerated, over-the-top situations on how the main character received these feelings.  But hopefully, I've still left the reader wondering... How much happier would my life be if I always paid attention to that guiding voice that whispers which way I should go?

Posted by Unknown at 5:27 AM No comments:

"The truth is stranger than fiction..."- Mark Twain

We've all heard that truth is stranger than fiction. I didn't realize just how accurate that statement was until I began putting my truth in ink.  Soon I had tens of thousands of words compiled into a book.  I weaved in some exaggerated ridiculousness and voila! my first young adult book, Inspiraled was finished.

But it doesn't end there.  As I finish up the last few chapters of my second novel riddled with strange truths, I am inspired daily with fresh, new crazy things to write about!

We all have a story to tell.  How do you tell yours?
Posted by Unknown at 12:26 PM No comments: