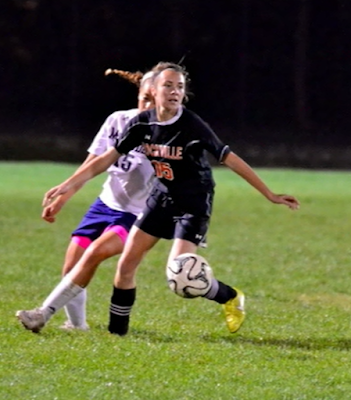 Inspiration for my Indi character came from none other than Miss Sassy Pants Junior, pictured here at a recent game.  At an awards ceremony she was described by her coach as "a fearless girl that will destroy anyone on the field to get to the ball.  Opponents that don't have the ball and get in her way- well, she'll run right through them, too."  Yup.
Excerpt from INSPIRALED:
“I don’t know.  Everything and everyone seems crazy to me right now.”  I answered, as I stared at the neon glow- in- the- dark stars that Indi had plastered all over our ceiling.  I had a sudden urge to spill my guts to my little sister right there and then.  Indi was a tiny little thing at just over five feet tall and one hundred pounds, but didn’t take any crap from anyone. She was a beast on the soccer field.  She was only fourteen but had been known to give me ingenious advice from time to time.

“What do you mean?”  She asked, starting to sound sleepy.  She rolled over and planted her face in her pillow, her back facing me.

“I don’t know exactly.  Do you ever feel creepy vibes off of people?  Like maybe you can sense that they don’t have good intentions or something?”

I didn’t hear anything but the wind that had started to howl.  “Indi?  Are you still awake?”

Once again I was left alone with way, way too many unanswered questions.
To continue reading INSPIRALED:
https://www.facebook.com/penelopeaaron2014 click on Shop Now
http://www.amazon.com/Inspiraled-Penelope-Aaron/dp/1495422224/ref=sr_1_1?ie=UTF8&qid=1454881304&sr=8-1&keywords=inspiraled
https://twitter.com/penelope_aaron
https://www.youtube.com/watch?v=9rUHA6BjxIA
Posted by Unknown at 2:20 PM No comments: 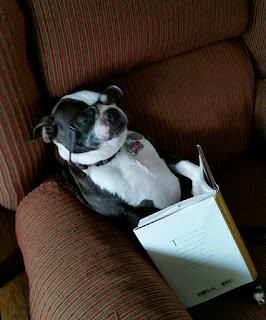 This is my dog, Buddy, who always prefers riding to walking, and sprawling on the couch to running.  He was my inspiration for the Bernie character in Inspiraled.


There were three quick flashes.  Pause.  Then again- flash, flash, flash.  Pause.  Flash, flash, flash.  I told Mom and Aunt Fab that I was going to take Bernie for a walk.  I wanted to investigate.  Bernie hesitated at the door like he didn’t want to put forth the effort it took to go outside because he behaved less like a dog and more like a person- the opposite of my brothers.  It had cooled off quite a bit outside and some clouds had rolled in, so I put on my charcoal colored pea coat over my sour-milk-smelling-sweater, along with my gray Ugg boots and headed out the door.
We wandered around a little bit closer to the house than I wanted to because Bernie was a pampered little Prince and not used to walking much further.  Flash, flash, and flash- there it was again.
“C’mon, Bernie, let’s go see what that is!” I coaxed.
I kept pulling on his leash, but he didn’t budge.   He had already taken care of his business and clearly wanted to get back to the couch.  The grass and brush was tall and thick and not exactly easy to walk through.  I picked him up and carried him further into the woods.  It was darker inside the trees and harder to see.  The grasses continued to get taller and thicker back there, and it took some work to keep hiking through it while carrying Bernie.   Who or what would be out there?  Bernie jumped out of my arms and started sniffing around as we went through an even thicker cluster of trees.  Someone was there.  I smelled fire.  Bernie continued to be lazy.
To read more of INSPIRALED go to:
https://www.facebook.com/penelopeaaron2014 click on Shop Now
http://www.amazon.com/Inspiraled-Penelope-Aaron/dp/1495422224/ref=sr_1_1?ie=UTF8&qid=1454881304&sr=8-1&keywords=inspiraled
https://twitter.com/penelope_aaron
https://www.youtube.com/watch?v=9rUHA6BjxIA
https://www.goodreads.com/author/show/7923835.Penelope_Aaron?ref=ru_lihp_up_abp_0_mclk
Posted by Unknown at 1:47 PM No comments: