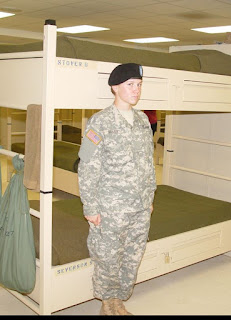 Inspiration for my Liberty character in my debut novel, INSPIRALED, comes from Miss Sassy Pants Senior, pictured here several years ago graduating from boot camp for the U.S. Army.  She has always been a "take no crud from anyone type of gal".  When she was in middle school she was grabbed inappropriately by a classmate and was not having it.  He thought he would laugh and run away.  Well, he got chased and tackled and pinned to the stairs by his throat.  It took two teachers to get her off of him.  I think he learned a lesson that day.  This true story inspired the scary subway events in the following excerpt from INSPIRALED:
We were on our last set of stairs, almost out of the cavern, thinking we were home free when Liberty screamed, “Noooooooooo!”
She had been at the back of our pack.  The rest of us stopped and whipped around to see what was wrong.  Then things happened very quickly.  Liberty kneed Scary Guy in the groin- hard.  He bent over in pain and went down on one knee.  His face was a contorted mask of surprised pain.  She grabbed him by the throat while he was weak and stunned, spun him around and pinned him on the stairs.  He squirmed around a little but couldn’t get up and/or breathe under the grip she had on him.  His eyes were glazed over like he wasn’t all there.  People scattered and stood back on the packed stairs to watch.
“You don’t grab people, you pyscho! You don’t follow people and scare them!  You keep your hands to yourself because you never know when you’ll meet a girl like me!  Do you understand me?”
Creepy’s face was red and turning purple and registered raw fear.  The audience watching began clapping and cheering her on.
“You tell him girlfriend!” yelled a large woman somewhere in the back of the crowd of people.
“Yo, teach him a lesson!” hollered a short man in the front.
“Liberty, come on, let him go!  He can’t breathe!” Aunt Fab whispered to her.
Scary Subway Man was making wheezing sounds while his eyes bulged out of his head.  The crowd continued to get louder with their cheers and began chanting, “Pun-ish him! Pun-ish him!”
To continue reading INSPIRALED:
https://www.facebook.com/penelopeaaron2014 click on Shop Now
http://www.amazon.com/Inspiraled-Penelope-Aaron/dp/1495422224/ref=sr_1_1?ie=UTF8&qid=1454881304&sr=8-1&keywords=inspiraled
https://twitter.com/penelope_aaron
https://www.youtube.com/watch?v=9rUHA6BjxIA
Posted by Unknown at 4:23 PM No comments: